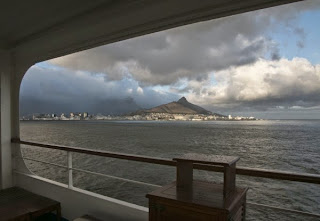 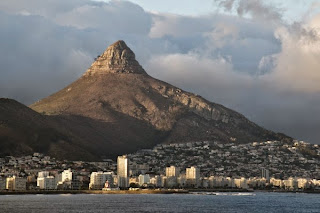 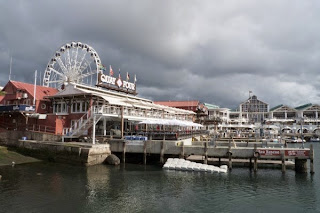 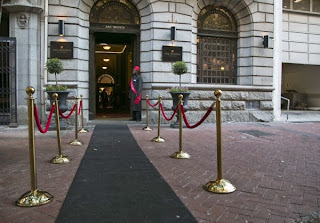 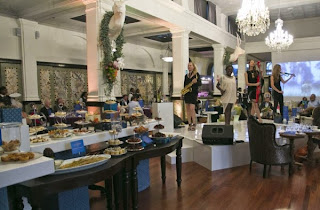 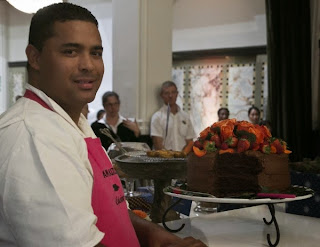 For our arrival in Cape Town, a cool wind was blowing in and Table Mountain was hiding behind a thick layer of cloud, however over the course of three wonderful days in this cosmopolitan city, the weather just got better and better.

The "new" cruise terminal in Duncan Dock is still not very prepossessing, but it's just a quick 10 minute walk to the vibrant Victoria and Alfred Wharf, with all its bars, restaurants and shops. By the next time we come, that walk should be much nicer, because the huge old grain silos we pass by are now being totally redeveloped to turn them into a multi-million dollar art gallery.

After a morning of exploring the V&A and doing a spot of retail therapy, we got ourselves ready for another World Cruise Experience, which was taking us into the centre of Downtown Cape Town for an opulent High Tea. The event was being staged in a beautiful old Victorian bank building that's now been turned into a really cool venue.

We were greeted by a fabulous female jazz trio on stage in the middle playing electric violin, electric cello and saxophone. The music was wonderful, while the fact that they also happened to be incredibly beautiful managed to keep the interest of most of the male guests. Later, they were joined by a fantastic vocalist – when she first started singing I thought that it must have been a backing track, it was that good. It all contributed to a really good vibe.

That vibe was certainly helped by the copious tastings of South African wines that we were downing along the way (there was also a tasting of 6 different teas, but the wines were more popular). This was also washing down a massive range of cakes, sandwiches and every possible choice of tea food you could think of.

The idea of a High Tea was a simple one, but the execution of it all was excellent – great food, great drink, great music, and just a great atmosphere. I wouldn't say that I'm a major frequenter of teas, but I don't think I've ever had a better High Tea.