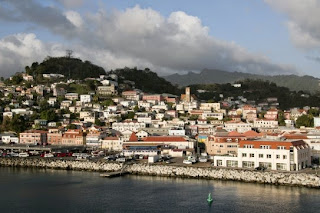 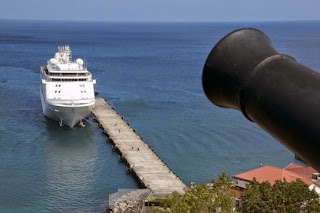 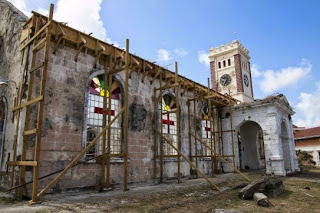 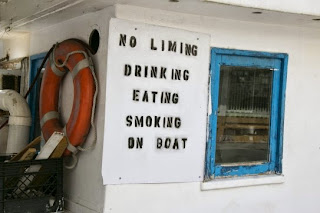 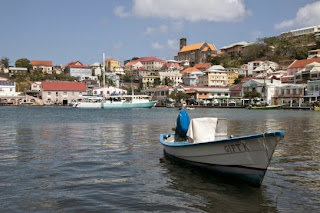 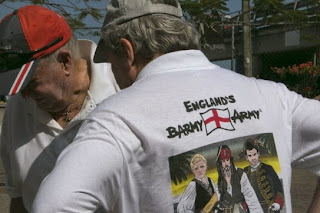 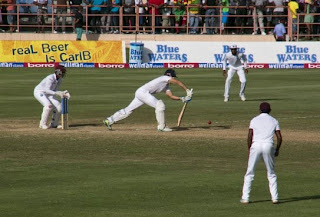 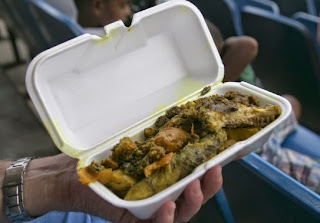 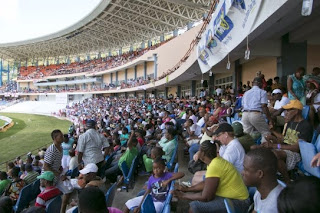 Tracy has always said that Grenada is her favourite Caribbean island, and after a fantastic day today, she's sticking with that view. By happy co-incidence, the English cricket team were playing the fifth day of the second Test Match against the West Indies today in Grenada's capital, St George's, so we had a chance to watch a fascinating day's cricket, just a 10-minute walk from the port.

First, we did a whistle-stop tour of the town – a really attractive place of pretty stone Georgian buildings, clinging on to the steep hills that back the waterfront. St George's was devastated by a terrible hurricane in 2004, and there are still quite a few buildings without their roofs on. However, this is a tiny country of just 110,000 people, so the rebuilding process is going slowly – although it was interesting to see the plaques of projects funded by China and Venezuela to see which countries have become strong influences here.

We visited the market, where the friendly traders did their best to convince us that we just had to buy some spices (this is the self-styled "Spice Isle" after all); we climbed up to the restored Catholic Cathedral, with its new roof on; walked past the still-devastated Anglican Cathedral; and then climbed up to Fort George on the rocky hill overlooking the harbour. This was the place where some of the most momentous events leading up to the 1983 US Invasion took place – including the assassination of Prime Minister Maurice Bishop. It was hard to imagine that an island as beautiful, idyllic and friendly as this, could have borne witness to such violence.

After exploring the pretty Carenage, I was now itching to get to the cricket stadium, so we followed the crowds and hot-footed it over there. The day's play had started with the West Indies untroubled at 220 for 2, and so it seemed to be heading towards an inevitable draw, which meant that I hadn't minded missing the first hour of play. However, as we queued for tickets, we could hear a series of groans coming from the stadium – it was obvious that something was going on while the queue was moving at a snail's pace.

Finally we got to the head of the queue and bought our tickets – I couldn't believe it when they said the price - $5.50 each! Whenever I've been to a Test Match in London, you don't get change from £50. What followed was the best value I've ever had at a day's cricket, and probably the best day's cricket I've seen too. Not bad for Tracy's first ever Test Match!

By the time we got to our seats, somehow (on a very flat wicket) England had taken four wickets in the first hour. We then saw 2 more wickets fall before lunch. Even though the atmosphere was understandably a little subdued at first (given that the West Indies were falling apart), it was so different to a Test back in England. While Lords and the Oval have a gentle hum of conversation and polite applause, a hum which slowly gets a bit more raucous as the crowd tuck into the booze; here, it already started off way louder than the most drunken English crowd. In between overs, the huge sound system on the other side of the ground was cranked to its booming max, as the base kicked in and the crowd danced frenetically. Everywhere around the ground, people were playing drums and blowing on conch shells.

Aside from the noise, the other difference with an English Test Match crowd was that there were so many women and children there, all taking a passionate interest in the cricket (at least while the result was in doubt) – this was a knowledgeable crowd. After lunch, it didn't take long for the final two West Indian wickets to fall, and then it was England's chance to bat, chasing a modest total of 143. When Trott fell in the second over, the crowd went mad – I almost wanted a couple more wickets to fall, to get the atmosphere really rocking.

Instead, England went about knocking off the runs in a calm and methodical manner, leaving the crowd to turn to the beer and the rum. If it looked on TV like the ground was only half full, that was because the bars in the stands were overflowing with people – every time I walked through the bar behind our stand, the smell of rum was almost overwhelming.

If it had been England slowly being strangled to death, the crowd would have thinned out appreciably, but this was only the third time that Grenada have staged a Test Match, so the crowd stayed to the bitter end, the drinking, drumming and dancing getting steadily more frenetic. At times, it scarcely even seemed like there was a match going on in front of us, as the action in the stands took over from the spectacle in front of us. A small group of England supporters, plus Tracy and I, were the only ones who were applauding the 50s, the 100 partnership etc, as England progressed towards their target, and the crowd continued partying like they'd just won the world cup. It seemed like not many people noticed when we finally won – the event was almost more important than the match.

To be here when the test was on, to get such cheap tickets, to watch an England victory, to sample such an amazing atmosphere, all combined to make this one of my favourite days of the cruise. Absolutely fantastic!