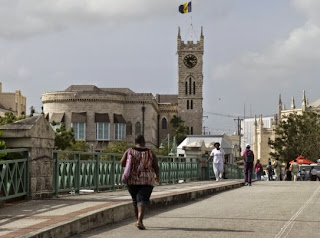 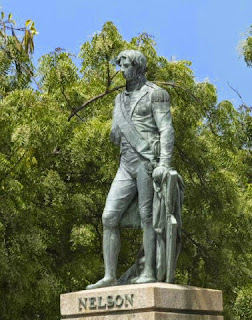 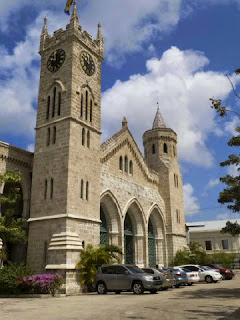 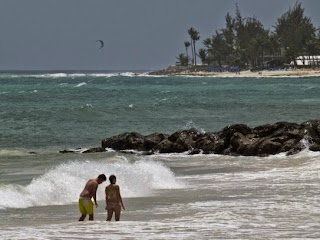 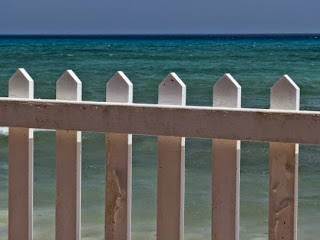 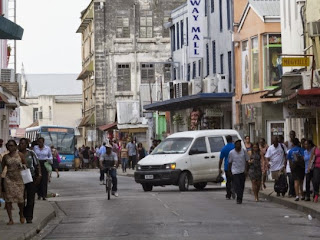 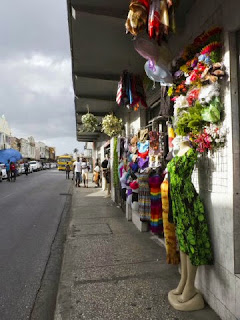 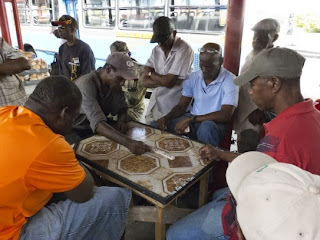 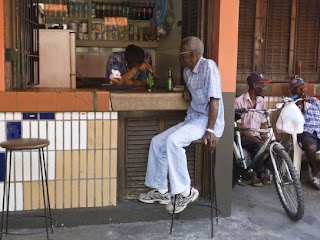 Having given my very last (of 49) lectures yesterday, I was now beginning to feel like I was on holiday. And where better to be on holiday than the beautiful island of Barbados?

My sister is coming to Barbados in a month's time, so our mission today was to check out her hotel, which is near Oistins on the South coast, and to see what the locality was like. So, we walked into Bridgetown to get the bus south, but on the way, we popped into the island's impressive Parliament building to do a tour of that. This is the third oldest Parliament in the former British Empire (having been founded back in 1639), and the current building was built out of pale limestone in a very grand Gothic Revival style in the 1870s.

We first did a quick tour round the interesting National Heroes Museum, which occupies some of the Parliament complex. It details the lives of 12 official "National Heroes", who were important figures on the island's journey from British Colony to Nation, transitioning from a slave-based society to proud self-determination. The heroes ranged from Bussa the leader of a tragic slave rebellion, to Earl Barrow the first Prime Minister, to Sir Garfield Sobers the legendary cricketer.

Then we joined the tour of the Parliament itself – the fact that we were doing it with a class of excited 6-year olds made it a bit more fun. They were all very well behaved and well marshalled by their disciplinarian schoolmistress, but every now and again the noise would build into a crescendo, before vanishing into finger-on-lipped silence when shouted at by their teacher.

It was a fascinating building to explore - with its stained glass windows and dark wooden panelling an obvious attempt to mirror the Houses of Parliament in Westminster – all a little bit out of place in this sun-drenched tropical environment. All the institutions of Westminster had been transported out here, from the Speaker to the Mace – although, when the guide pointed at the Speaker's Chair in the Middle and asked the children who sat there, the answer yelled back was "The Queen of England!"

It was interesting to hear the guide's take on the recent announcement by the Barbadian Prime Minister that he wanted the country to become a Republic, and to remove the Queen from being the Head of State. She felt that he was merely trying to divert the public's attention from the dire state of the economy, and that the people had too much attachment to the trappings of their royal association to want to move to Republic status any time soon. Time will tell on this story.

At the end of a fascinating tour, it was time to head to the bus terminal to make our journey south. We were catching the informal buses, where the touts good-naturedly attempt to drag you into their particular bus and cram you in like sardines for the journey. Fortunately, this particular bus didn't have an ear-splitting sound system like most other buses we've been on, so this journey was merely cramped and sweaty, rather than cramped, sweaty and deafening.

It took about 40-minutes to head down to Oistins, passing a whole array of beautiful white beaches along the way. Some of the houses we passed by were slightly ramshackle, but Barbados is obviously much better off than the other West Indian island nations – it seems to me like it's one of the best run countries in the Caribbean.

Oistins seemed like a nice place – not too touristy, so it has a more genuine atmosphere, particularly in its lively fish market. This is the place on the island to go to on a Friday night, when lots of bars and shacks open up in a large alfresco party zone. We were here on a Friday early afternoon, but unfortunately we weren't staying late enough to see what it gets like after dark.

The beaches on the south coast are typically beautiful, if a little windswept, but this did mean that there were lots of watersports going on on those attractive turquoise seas. By now it was time for lunch, so we went to my sister's hotel for lunch – it's certainly in a very pretty spot.

After a very relaxing meal, we got the bus back to Bridgetown, which had by now developed a very lively Friday evening feel – its streets packed with shoppers and locals just promenading around, music blaring out of virtually every shop and bar. It was a very jolly atmosphere, and without fail, everyone we spoke to was friendly and chatty.

Today we saw the best of Barbados – well run democratic institutions; beautiful beaches; great tourist infrastructure; and, above all, friendly people. I think my sister is going to like it!