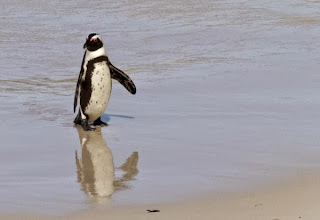 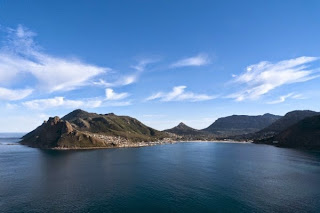 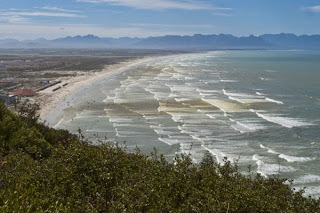 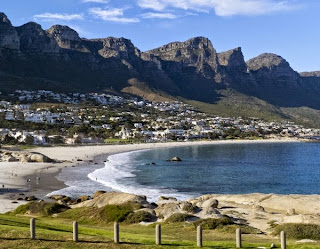 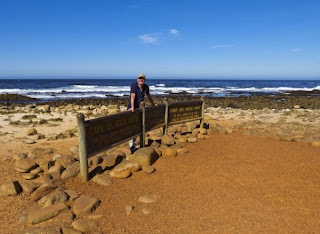 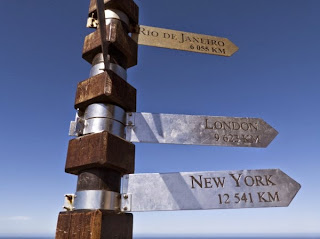 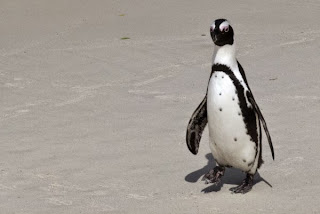 On our final day in Cape Town I joined a tour that was heading down to the stirring landscapes of the Cape of Good Hope at the very point of the Cape.

A lot of people assume that the Cape of Good Hope is the southernmost part of the African continent, but that accolade actually belongs to Cape Agulhas, a bit further along the South African coast. But, what gives Cape Point its distinction is that this was the stormy peninsula that western explorers had tried and failed to round for decades before the Portuguese explorer Bartolomeu Dias finally rounded the Cape in 1488. Once they'd got around that Cape, the route to the East was now opened up to the Europeans, and so set off the great global empires of the Portuguese, the Dutch, and the British. So, the sign at the Cape is careful to point out that this is "The Most South-Western Point of the African Continent".

We didn't have to face any stormy seas to get there, but the drive down to the Point was fairly spectacular - the road hugs the cliff edge as we passed a succession of gorgeous white beaches below us. On one of them, the spectacularly wide Noordhoek Beach, Tracy was doing her first ever horse ride – she said that it was quite gentle, and she wasn't walking like John Wayne when we got back to the ship.

We were incredibly lucky with the weather – the wind had made sure that the skies were razor sharp, while those stormy seas that the area's famous for never made an appearance. So, there weren't any elemental conditions to contend with, but there was an end of the world feel to the place, as we looked South and knew that the next piece of land you'd hit was Antarctica.

After catching the funicular up to the top of Cape Point, and enjoying the magnificent views, we headed to the other side of the peninsula, to visit Simons Town – home to the South African Navy, and more relevant to our visit, home to a gregarious colony of African penguins. Having seen all the African Big Game on our safaris over the previous days, it seemed odd to be viewing penguins out here in Africa, but these ungainly penguins are always fascinating to watch as they waddled about and quarrelled grumpily with each other. You couldn't help but make up the conversations in your head that they could be having with each other as they lumbered around on the beach, before staggering over to the incoming waves and suddenly transforming themselves into graceful sea creatures.

When you get up close to a penguin colony, you quickly realise that their seafood diet makes them pretty stinky, so for lunch we decided that if you can't beat them, join them – so, we had a lovely fish dinner.

After a whole load of food and a couple of drinks, our stamina for sightseeing was waning a little by now, but we just about kept the energy levels up for a visit to the beautiful Kirstenbosch Gardens back in Cape Town, before it was time to get back to the ship.

Many of the passengers have commented that our three days in Cape Town made this their favourite port of the World Cruise so far. We had time to do this wonderful city in depth, and to explore its wonderful range of sights in depth. It's a great place for urban sights and history, or natural sights and wildlife, while if you just want to go shopping, or eating, or drinking, then Cape Town has all of those covered off. What a great place!