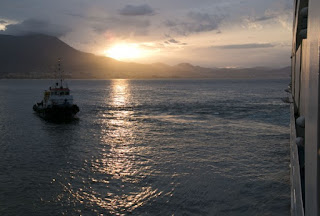 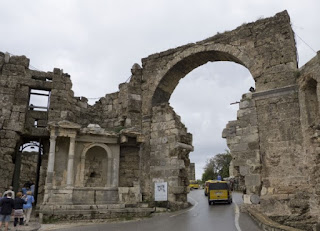 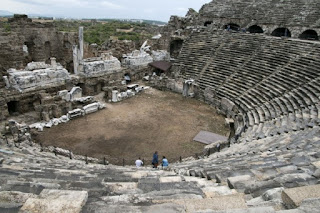 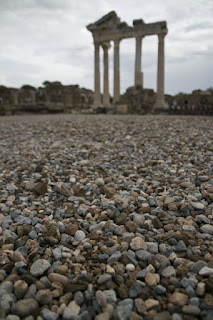 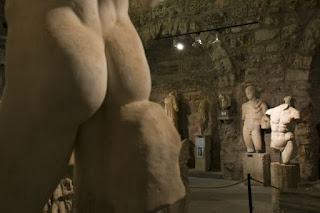 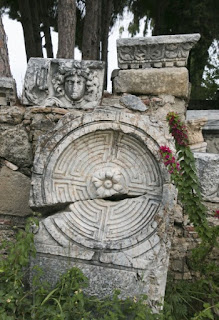 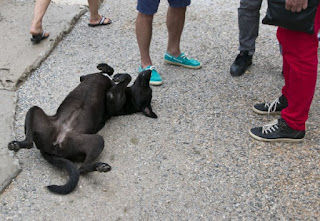 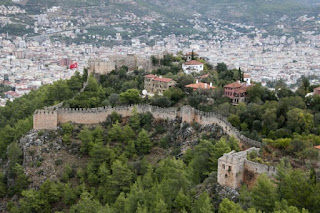 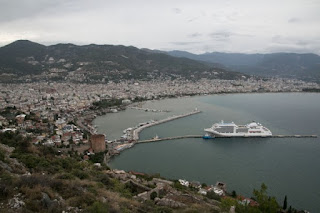 These days, Alanya is a fairly bog standard holiday resort, catering mainly to the German and Scandinavian package holiday market. However, as ever in Turkey, underneath all the modernity, there's layer upon layer of fascinating history to discover.

In the morning, we joined the tour travelling along the coast to Side (pronounced See-day) to visit its ancient ruins, dating from the time when it was a thriving Roman provincial city. On the way, we passed hotel after hotel after mega-resort proliferating along this over-developed stretch of coast - its attractiveness(!) wasn't added to by the torrential rain, the threatening black skies, and the thunder and lightning.

However, with the tempest miraculously stopping just as we arrived, the ruins at Side didn't disappoint, even though they've been almost swallowed up by the tourist industry that surrounds them. Strangely for an ancient site, the set of majestic temples, baths, agoras, columns and theatres are all broken up by lots of modern restaurants, shops and tacky souvenir stalls lining the traffic-clogged streets. These streets were chock-a-block with the holidaying hordes, who, seeing as this was most certainly not a beach day, had come en masse to Side.

We visited the evocative ancient baths, which now house an excellent museum of wonderful statues and sarcophagi that attest to this being a wealthy and sophisticated Roman city in the 2nd century AD. But, the most impressive relic of ancient times was the magnificent theatre. It was originally built into the side of the hill by the Greeks, and when the Romans came, they decided to enlarge it by adding extra tiers of seats supported by huge arched vaults. Seeing this ancient pleasure palace surrounded by thousands of modern pleasure-seekers made it feel like not much has changed in the last 2,000 years – it's all about keeping the masses happy and entertained.

Just before the heavens opened again with avengeance, it was time to head back to Alanya, where we got absolutely drenched getting back on to the ship. But, having dried out, the weather cleared a little too, so we ventured out to see what the town had to offer.

It's actually quite an attractive place, with long sandy beaches, a low-key bazaar, and a huge medieval castle on the headland overlooking it all. I doubt it's such a pleasant environment at the height of summer, when I'm sure it gets as jam-packed as Side was this morning, but on a grey afternoon at the very end of the season, it had an agreeably laid-back atmosphere.

Of course, that precipitous castle high above is a challenge to the cruise passenger who wants to combat the weight gain of too many pre-dinner champagnes and 5-course dinners, so we decided to work off a few calories, by climbing that steep hills that lead for the 2 miles up to its peak. So, we followed the snaking lines of ramparts, stumbling our way up those thigh-achingly steep paths to the top – on the way enjoying some amazing views over the town and the ship below.

Our destination, the 13th century castle, was more about the physical challenge to get up there than what you actually see at the top; but, you get a feel for the dangerous times when it was built, just from the fact that they chose to build the fortress on such a ridiculously tall hill.

Having climbed our Alanya Everest, that well-deserved glass of champagne tonight, will taste just a little bit more guilt free.