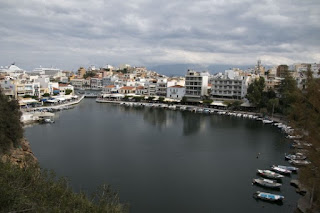 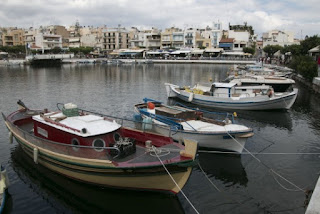 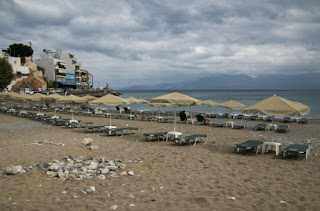 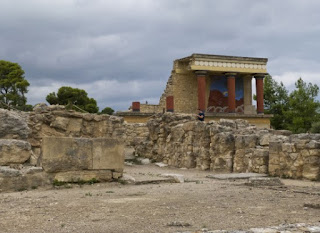 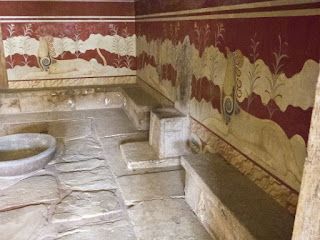 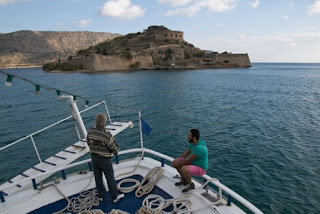 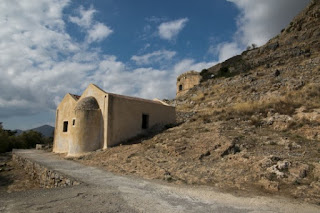 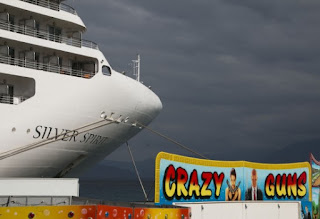 Today we visited the beautiful little town of Agios Nikolaos, Crete. While Tracy was exploring the enigmatic island of Spinalonga (home to a Venetian Fortress and a more recent leper colony), I was paying a visit to Knossos, home to Europe's first urban civilisation, the Minoans.

Maybe it was because I'd been to the more tumble-down ancient sites of Delphi and Mycenae the two days before, but the reconstructed temples and buildings of Knossos seemed more artificial to me than on earlier visits. Previously, I'd found the reconstructions pretty helpful in getting a stronger idea of what the site would have looked like in its hey-day, 4,000 years ago; but this time I was struck by how much artistic and architectural licence those Victorian archaeologists must have used in putting together their idea of what the palace could have looked like.

The other thing about their reconstructions is that they used concrete to fill in the gaps between the multi-storey buildings when they put the piles of rocks back together again. However, that concrete has proven to be a lot less durable than those 4,000 year old rocks, and is already deteriorating fast. If the money can be found, those restorations need to be restored.

However, it's still mind-boggling to think that this was a palace complex of over 1,000 rooms, set over 5-levels – no wonder that the legend of the labyrinth arose in a period when a building of one or two rooms would have been an architectural marvel in the rest of Europe.

Our guide told us gave us an interesting perspective on how old they were – they were as distant in time from the age of Julius Caesar, as he is distant from our time. But, most of all, a visit to Knossos reminds us of just how advanced the ancient Minoans were – artistically, architecturally, and culturally, they were an enormous step on from anything else that Europe had to offer.

It was another fascinating visit, but I might give myself a break from ancient ruins tomorrow......