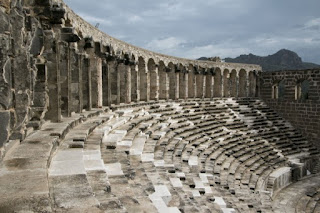 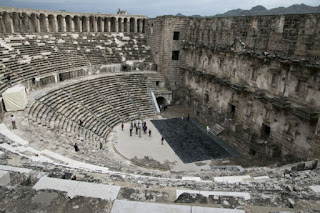 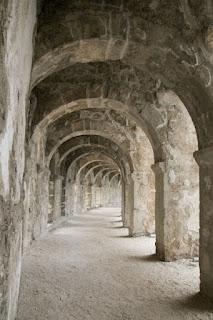 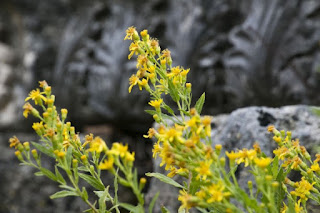 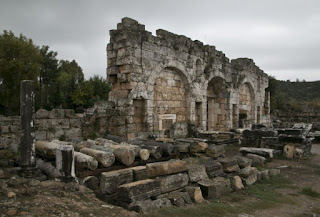 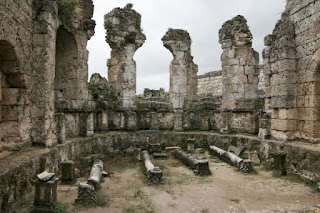 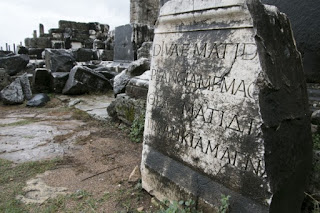 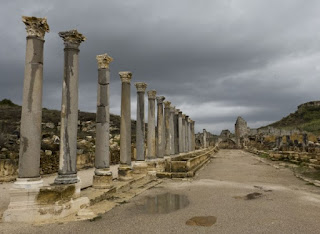 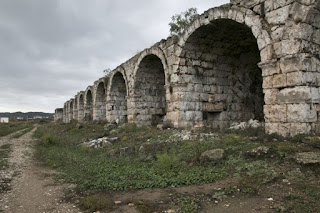 For a place that likes to boast that it gets 320 days of sunshine a year here, it certainly can rain in Antalya. For most of the day, the rain was bouncing off the pavements in a torrential rainstorm that you'd expect to find in the tropics rather than on the Turkish coast. It all seemed to make sense that Turkey was the place where Noah's Ark came to rest after the great biblical flood.

Yet, strangely enough, we were actually quite lucky with the weather for our tour to the ancient Roman cities of Perge and Aspendos. All the time we were on the bus, the heavens opened and the streets were mini-rivers. Yet, somehow, every time we got off the bus, the rain miraculously stopped and we were able to explore without getting drenched.

Our first site was the magnificent ancient theatre at Aspendos – the best preserved theatre to have survived from antiquity. With its steep banks of seats (capable of seating 15,000) and its huge, multi-storey stage back-drop remaining in its entirety, this place effortlessly transformed you back to the days of ancient Rome. It was a quite wonderful sight – as I was leaving, I kept on having to turn round, to get one more glimpse of this amazing theatre.

Then we moved on to the ruined city of Perge, which was at its height in the 2nd century AD. I haven't been here for about 5 years, and at the end of my lecture on it, when I was waxing lyrical that it was better than most ancient sites you can find in Greece or Italy, I suddenly got worried that I'd oversold the place. However, I shouldn't have worried, because it was every bit as good as I'd remembered; plus, we were pretty much the only people there, which made it even better.

It was the sophistication of the Roman town planning that really impressed – with a theatre for 10,000, a huge stadium for 12,000, and an enormous bath complex of fountains, saunas, and under floor heating. Running alongside its long main street, lined with colonnades, was one long succession of fountains and a controlled stream of running water. Not only did it look beautiful, but it would have enabled the Pergeans to wash down their street whenever they needed to, and kept them cool in the heat of summer.

The thing that strikes you on a visit to Perge, was how did a city that was as large, as sophisticated, and as comfortable as this, suddenly lose its significance to such an extent that it was abandoned and forgotten about? Because, with the fall of the Roman Empire, and without the benefit of Pax Romana, the trade that was the lifeblood of the city stopped abruptly (not helped that the river which brought much of that trade silted up too).

The ancient sites we've seen over the last couple of days are wonderful proof that Turkey (or Asia Minor as it was then) really was at the centre of western civilisation 1,800 years ago. Let's hope that the torrential rain that somehow got even heavier in the afternoon, didn't wash them away.