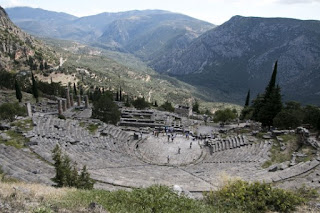 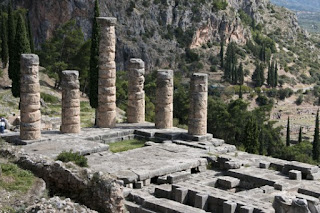 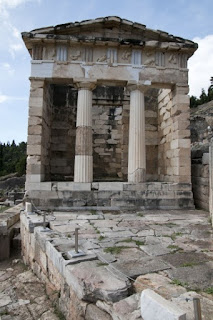 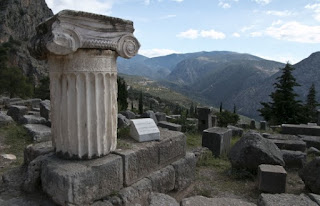 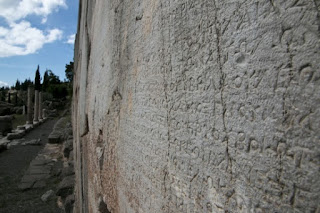 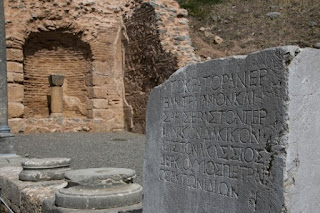 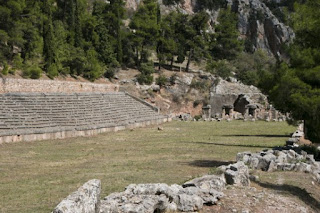 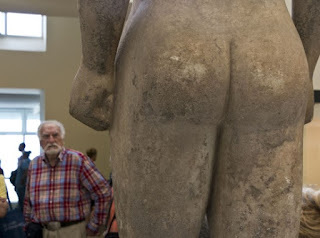 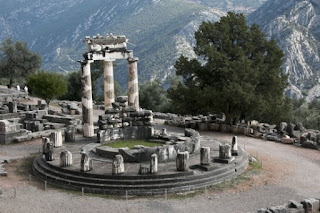 To the Ancient Greeks, Delphi was literally the centre of the world, and for me, it's always been a place that I've wanted to go to. The strong winds that had blasted us in Limnos meant that our call in Mykonos had to be cancelled, which gave us an extra day in Pireaus, and time to make the 3-hour trip out to this truly evocative site.

There are so many legends and historical stories attached to Delphi and to its mystical Oracle, which doled out dubious advice to the Ancient Greek world – prophesies which were totally open to interpretation, but which were used as justification to embark on anything from wars to love affairs. It all sounded like the work of a corrupt spiritualist being paid huge sums to tell people exactly what they wanted to hear, but the power of the sanctuary was unrivalled.

The stirring setting of the place alone was enough to give the place a certain mystery – carved into the steep hills of Mount Parnassus, 600 metres above sea level. While, even allowing for the site being ravaged by various attackers, and by numerous earthquakes and landslides, the ruins gave a strong impression of what must have been the richest sanctuary in the ancient world.

To gain access to the famed forecasting skills of the Oracle, each city and island had to present the gods with enormous riches, which were stored in magnificent treasuries, that were in an unofficial architectural competition with each other. Most of them are only at foundation level these days, however the Treasury of the Athenians had been reconstructed to give us a hint of the opulence of this site.

Aside from the atmospheric theatre carved into the steep hillside and the long stadium even higher up the hill, the most impressive feature was the huge Temple of Apollo where the Oracle herself would have uttered her hallucinogen-inspired sayings, that were then re-interpreted and passed on by the priests to the eager recipients.

After the site, we also had a quick visit to the wonderful Delphi Museum – this was just a small selection of what's been found here, but it was one of the better ancient collections that I've been to – the amazing bronze statue of a charioteer is unique in its detail and preservation.

I've been to many ancient sites, but this has been one of my favourite – for its significance, for its setting, and for what has survived the millennia. I really enjoyed my journey to the centre of the world.