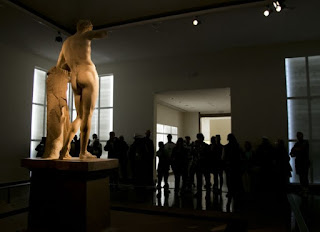 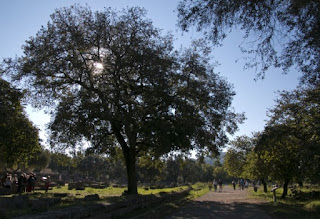 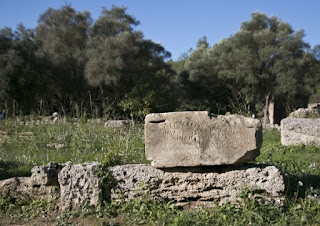 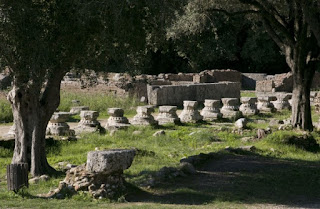 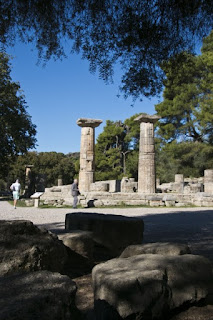 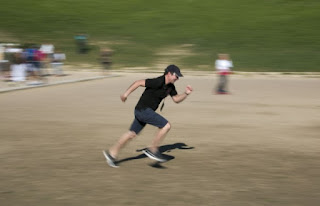 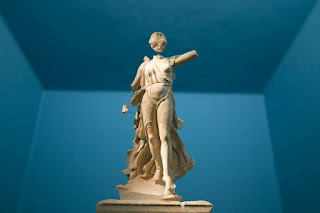 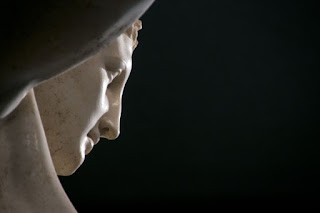 The ancient Greek site of Olympia is probably just as interesting for its historical significance, as it is for the ruins themselves. It's once wonder-ful (it was home to one of the Seven Ancient Wonders of the world) array of temples and treasuries have been repeatedly damaged by man (by the Christian Byzantines who didn't approve of pagan temples), and by nature (in a whole series of earthquakes, floods and mudslides).

What's left, is most impressive in its size – when you see the enormity of its scattered pieces of columns and then extrapolate upwards, then those ancient temples must have been amazing constructions when they were in one piece.

The most evocative part of the site is the old Olympic Stadium – where 40,000 spectators would have roared on the sprint races. To get connected with the ancient games, Tracy made me get down on the old starting blocks, and re-enact a sprint. Actually, I was quite impressed by the speed that my old bones got me up to, although after about 20 metres I was already puffing badly, so I sensibly stopped before I had the embarrassment of pulling a hamstring or just collapsing.

I then limped over to the site's museum to be re-invigorated by the quite amazing quality of the sculptures on display. Looking at the re-constructed sculptures from the pediment of the Temple of Zeus, it was hard to believe that these weren't modern copies, they were that perfectly preserved. Our guide explained that when the temple fell down, the statues would have landed in the soft mud that had engulfed the site, and so their soft landing meant that they were hardly damaged.

Without doubt, the highlight was the breathtaking sculpture of Hermes, whose polished marble had been sculpted by Praxiteles 2,500 years ago. In its subtle power and beauty, it was a similar feeling to standing in front of Michelangelo's David in Florence. In fact, the longer I looked at it, the more it reminded me of David – in the carefree pose, athletic build, and self-confident stare of Hermes. In fact, it was so similar, that I thought Michelangelo must have been directly influenced by Praxiteles's masterpiece. But the statue was only discovered on the site in the 1870s. It goes to show that genius is a timeless quality – two masters of their art, separated by 2,000 years, producing work of such incredible power.

Having left the room, I felt compelled to go back two more times just to get another glimpse of it – art doesn't usually have such an effect on a heathen like me. This was the embodiment of the Olympian Ideal, or at least the Ideal Olympian.