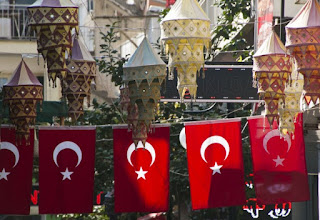 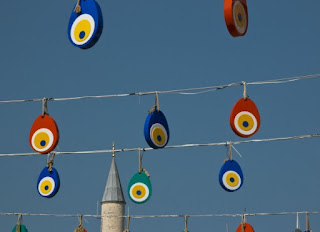 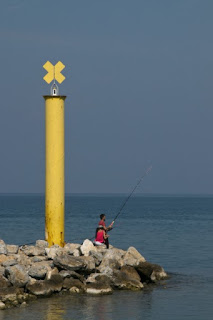 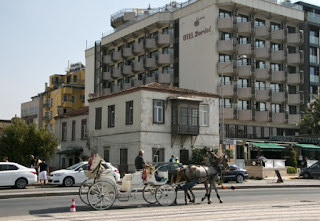 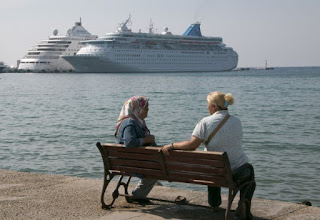 The reason that ships call in at the Turkish port of Kusadasi, is to visit the fabulous Roman ruins at Ephesus. However, seeing as we're coming back here next week, we just decided to do a bit of a walk around town.

40 years ago, Kusadasi was just a small fishing village, but since the tourist world discovered it, it's exploded with developments, and become a crowded modern resort, mostly built out of concrete. However, it's not without its charms, and its bazaar (which is the second largest in Turkey, after Istanbul), doesn't have the same level of hassle as most Turkish bazaars. Here, most of the shopkeepers have learnt that western tourists generally don't like being poked, prodded, dragged into shops, or being conned into going inside, so they just make a joke and appeal to your sense of humour.

If you do go inside, you quickly see that most shops are full of fake goods at low prices – named brands of copied watches, clothes, bags, perfumes and anything else that they're able to rip off. We asked one shopowner how they manage to get away with it, without being sued by the companies – he said that when a brand sends in their lawyers, the shop has already been warned by the police to take that particular brand off their shelves and hide them. Whether that's true or not, these shops have being selling fakes for 30 years plus, and they show no sign of stopping.

Having decided not to contribute to the counterfeit industry, we stopped for lunch and wifi at the new yachting harbour – more frequented by locals than tourists, so no "All Day English Breakfasts" on offer. Being the sad people we are, we took advantage of the wifi to catch up with the most recent episode of Downton Abbey – sitting by the sea and catching the warm sea breezes, made our viewing even better.

We promise to be more cultured next time we come to Kusadasi!