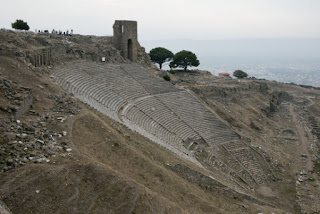 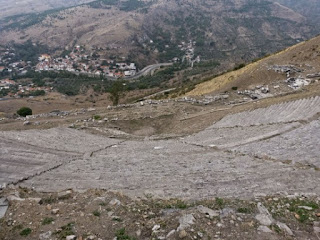 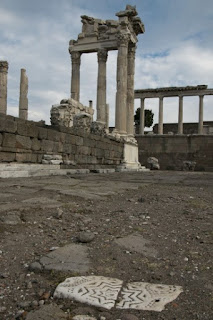 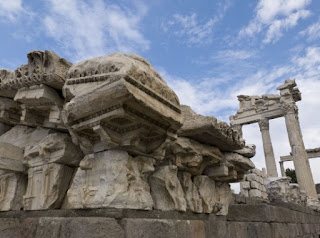 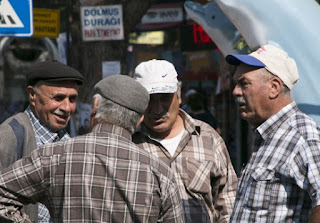 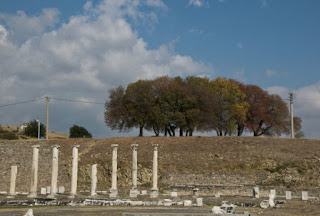 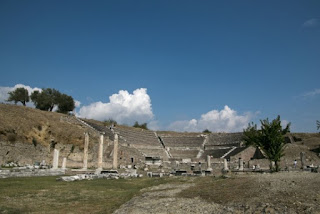 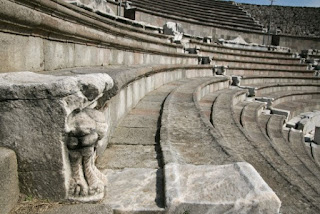 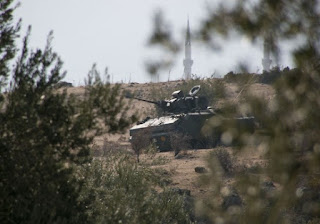 I've always wondered why people would choose to live at the top of a steep hill rather than at the (far more convenient) bottom of a hill. A visit to the magnificent ancient site of Pergamon always inspires that question more than any other ancient site in the Hellenistic world. Because, rather than live in the fertile valley below, the Pergamenes chose to build their city at the top of an incredibly steep hill, 380 metres above sea level.

To live in this precipitous environment, took some incredible feats of ancient engineering and architecture that have left us with one of the most spectacularly located set of ruins in the whole of the Aegean. 2,500 years ago, they didn't have the luxury of a cable car to take them up to the top like we did, instead, they would have had to carry the enormous amounts of marble that adorned their magnificent city up that impossibly sheer hillside. The fact that they did so, shows us how fabulously wealthy this city once was, in a time when Pergamon would have been home to 150,000 people.

In fact, that wealth that the ancient city amassed, provides the answer to the question of why they chose to live up here – the natural defences of the mountain provided the city with the best defences from Pergamon's enemies, who wanted a slice of their money. Because, the Pergamenes were one of the ancient world's pragmatists – rather than having a great army and conquering people, they earned their cash from turning themselves into a cultural centre, a seat of learning, and a huge health centre. Knowledge really was power for Pergamon.

However, time hasn't been kind to this city, nor have the early archaeologists (who took away many of their most impressive finds to the Pergamon Museum in Berlin), which means that the site of what was once the world's second largest library is now just a few columns and random bits of marble. However, the ridiculously steep theatre, and the huge marble-covered Temple of Trajan give us a few hints of the splendour of ancient Pergamon.

Down below, at the foot of the cliff, we also visited the Asklepion, the most famous hospital, psychiatric sanatorium and wellness centre of the ancient world. It was fascinating to see that the ancient medicine men had similar views about mental and physical well being as we do today. Patients were encouraged to take hot baths, listen to music and take herbal remedies, as well as a few wacky treatments that Hollywood stars would pay a fortune for if they were told it would make them younger, thinner or more beautiful.

For the passengers who had visited Ephesus the day before, Pergamon made a nice contrast. Its set pieces weren't quite as impressive, but its back story was every bit as interesting, while its setting was way more spectacular. Highly recommended.

PS. In a reminder that the modern world is no more sophisticated than the ancient one, from the site of the Asklepion, we could see the Turkish army doing tank manoeuvres on one of their training bases. It made for a strangely incongruous sight, right next to this peaceful ancient site.